Truffle Fries to die for!

I am not sure where the truffle fetish started for me. I think it was in Italy a few years ago, when I found a dried fettuccine, infused with truffle. I bought up a few packages, listened to Wee Bear complain about it, and brought it home. I cooked the first package, and thought, "it can't get any better than this." Then, on a family ski trip, we found a restaurant with truffle popcorn, OH MY! We were back the next day for more! We went to the local store bought up the truffle oil, and Amy, Laura and I were hooked!! We would search out restaurants for truffle anything, and post it on Facebook, making the others jealous! We were hooked!

Wee Bear likes french fries, extra crispy.....no truffle, and the two sons and two son in laws agree!! So, if you don't like truffle, don't put it on. But, make the fries, these are the BOMB!! 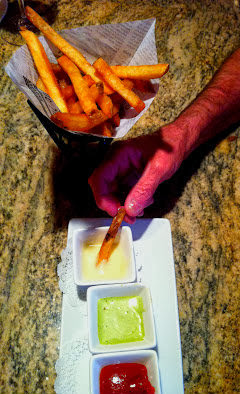 These facts are disputable!

2. French fries dipped in a mixture of ketchup and mayonnaise are divine.
3. Did you know that’s called “Fry Sauce” in Utah? Found that out on a ski trip to Park City with Wee Bear and kids!
4. If you peel a bunch of potatoes and cut them into sticks, then immediately plunge them into hot oil and fry them, they will never, ever, ever, be as good as the french fries I’m showing you below.
5 Finish with truffle oil~ put a fork in me, I'm DONE!!

But it’s really true, to get perfectly golden french fries that are soft in the middle and crisp on the surface, plunging potatoes straight into oil just doesn’t work. The starch on the outside of the potatoes interferes with the texture of the fries and never allows them to become nice and crisp, and in order to cook the fries long enough to soften the potato, the outside can often get too brown. Utter chaos, I’m telling you!
But once you try french fries the way they’re meant to be made—and the way they’re made by most restaurants and fast food chains—you’ll be adding them in to your menu often! Whether or not this is a positive thing, is something I’ll let you figure out, especially after my comment yesterday! But, moderation, we'll get back to health on Monday......I promise!!

Begin by peeling five pounds of potatoes, then cut them into sticks. Throw them in a pot or large bowl and cover them with cold water, then let them soak for at least two or three hours. Soaking the sliced potatoes is the fundamental first step of making great french fries. The soaking process removes the starch on the outside of the potato, which will help the fries achieve the perfect crispness, as Wee Bear would say! My Mother made us fries often when we were growing up, she always soaked them first!
Note: Because I got into the habit of planning ahead for fries, I usually wind up soaking the fries for several hours, or even overnight. I’d say the minimum time you’d want to soak the potatoes would be an hour, but there’s definitely no harm in going longer.

IMPORTANT: Please be careful when frying with hot oil. Keep the pot on the back burner, if you have small children. Soak potatoes, dry potatoes, fry potatoes, drain potatoes, then fry again!
Peel and rinse the potatoes, then cut them into sticks by cutting the potato in four or five vertical pieces, then cutting each piece into sticks. Place them in a large bowl and cover with cold water, then allow them to soak for two or three hours. (You can also stick them in the fridge and let them soak for several hours or overnight.)
When you're ready to make the fries, drain off the water and lay them on two baking sheet lined with paper towels. Blot them with paper towels to dry them.
Heat a few inches of oil in a heavy pot to 300 degrees. In 3 or 4 batches, cook the potatoes for about 4 to 5 minutes per batch, or until the potatoes are soft. They should not be brown at all at this point! You just want to start the cooking process. Remove each batch and drain them on new/dry paper towels.
Once all the potatoes have been fried at 300, turn up the heat until the oil reaches 400 degrees. When the oil's hot, start frying the potatoes in batches again, cooking until the fries are golden and crisp. Remove from the oil and drain on paper towels.

Look at what you made! A beautiful, golden brown, crispy, tender, gorgeous, perfect plate of french fries. If you can do this, you can do most things in life!


Have a GREAT weekend! See you on Monday for a healthy recipe!