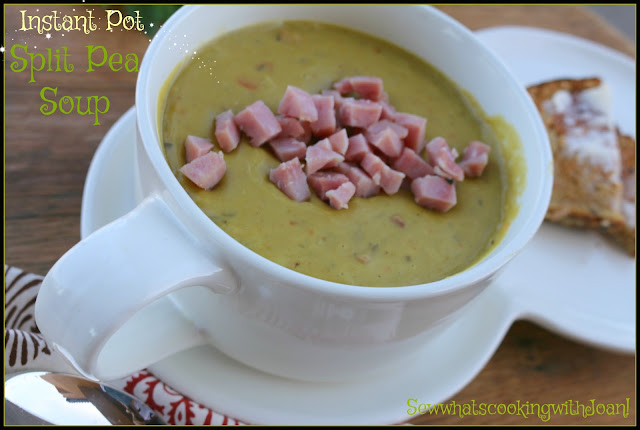 Split pea soup is never going to win the "Winter soup Olympics". The signature hue of mushy pea green will never be prized as fashionable by anyone but me. When I told Wee Bear I was making split pea soup, he said,"Why"? If you know
people who stand up and cheer when they hear that it’s a split pea soup for dinner kind of evening, you know they are amazing, rare fairyland people I would like to have over for dinner more often. It could be argued that split pea soup doesn’t help its cause by its mushy texture that usually solidifies into a brick in a fridge overnight. Hahaha....that being said.....Wee Bear loved it and so did I....of course!
Let me tell you, Wee Bear has never liked Split Pea soup for all the reasons above, but, when he tasted my Instant Pot Split Pea Soup, he  said it is really good!
Now, I like to use the 'immersion blender' in the pot to make mine smoother, but, if you like yours with chunks, skip that step!

I looked up the history of Split Pea soup, it is posted below the recipe.

Rinse the peas and pick through to remove bad ones.

Melt the butter in the instant pot using saute mode. Saute the onions until soft, stirring carefully as to not brown them.

Add garlic, carrots, and celery to the instant pot and cook for another 3-4 minutes. 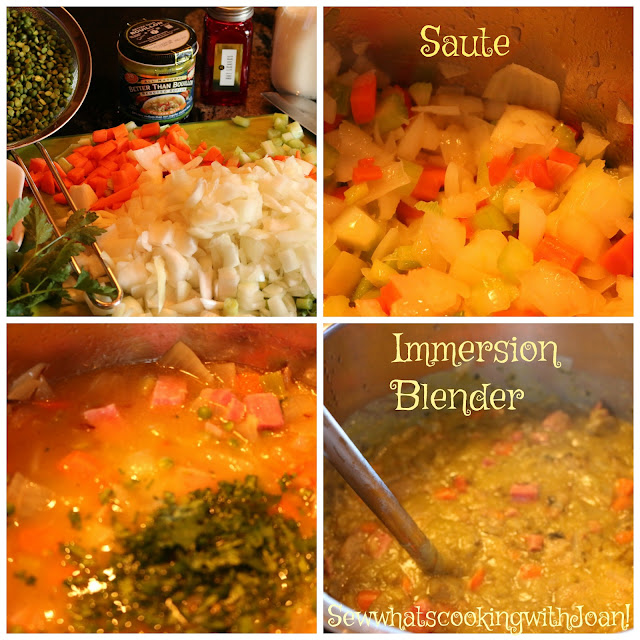 Put the chicken stock in the instant pot, bring to a boil, add ham bone, peas and parsley. Put the Instant Pot to High pressure, put on the lid and turn the valve to closed, put the time to 15 minutes. Allow a natural release for 15 minutes and then carefully move the valve to open. 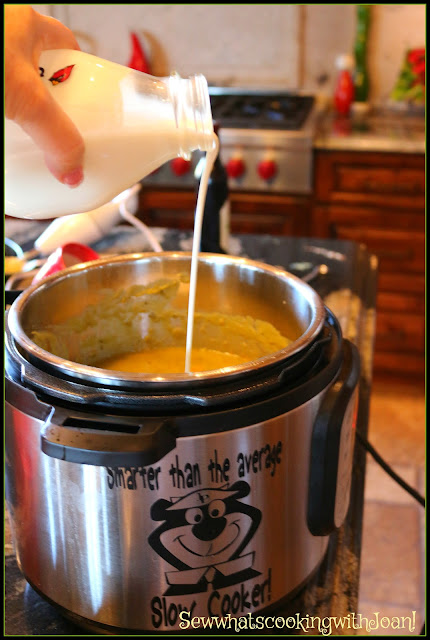 Remove the ham bone. At this point I use the immersion blender right in the pot for less than a minute to smooth it out just a bit. Add the cream/half and half if desired. If your soup is too thick add a little stock to it. Add  the diced ham and heat through. Season to taste with salt and pepper.

Ladle into bowls and garnish with chopped ham or croutons.

*This soup can be made vegetarian, leave out the ham/bacon.

*You can make this without the ham bone. Just use 2 ounces more diced ham.

Pea soup has been eaten since early ages and it’s heartiness, high nutrition value and low-cost has made it part of the cuisine in many cultures.  The soup is typically made from dried peas that vary in color from grayish-green to yellow depending on the regional variety and cooked with various root vegetables and pork to add flavor.
In Britain, “Pease” is used as the singular and plural form of the word pea.  Pease pudding was a low-cost high-protein food staple and it was easy to store dried peas.  Before the nineteenth century this was an ideal food for sailors to boil with salt pork, which became the origins of pea soup.
Nineteenth century literature makes several references to eating pea soup as a simple food for farmers and a sign of poverty:


In Canada, split pea soup is made with yellow peas and it very popular nationwide.


Split pea soup in Germany is also very common, containing meats such as bacon, sausage or smoked pork and served with a dark rye bread.


“Snert” is the Dutch version of pea soup.  It is a thicker stew of split peas, pork and various vegetables.  In the winter many outdoor food stalls will serve hot “snert” as a hearty snack along frozen canals and lakes for skaters.


In Poland pea soup is the popular food to serve in the military since it is nutritious, cheap and can be easily prepared in large quantities.  It is said that military pea soup is thick enough to hold a spoon straight up.


In Sweden and Finland it became traditional to eat pea soup with pork and pancakes on Thursdays as a preparation for fasting on Fridays.  Mustard is also an important part to serve with the pea soup so diners can stir it in to taste.  Even the Swedish and Finnish Armed Forces have been following this Thursday tradition since World War 2.


In the United States, pea soup was introduced in New England during the 19th Century by French-Canadian millworkers.  It was widely eaten in the colonial period and served as a thinner soup with pork, carrots and dried split peas.
500 to 400 BC: The Greeks and Romans were cultivating this legume about 500 to 400 BC.  During that era, vendors in the streets of Athens were selling hot pea soup.


Enjoy! From our little cottage on the Carribean.... 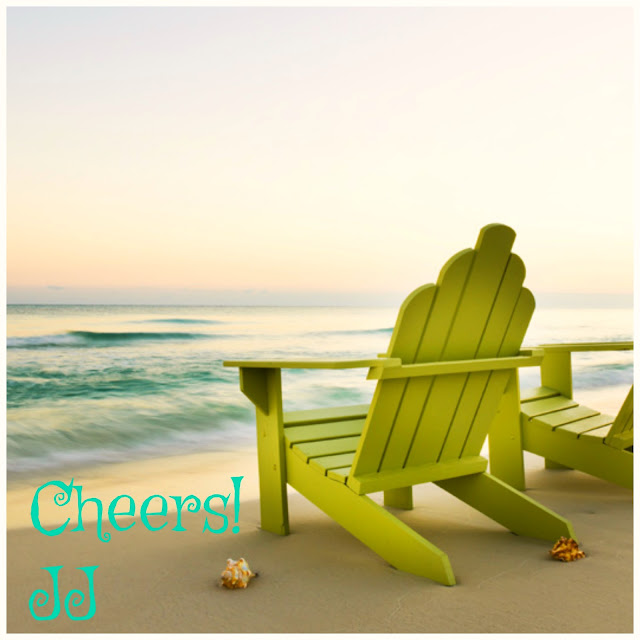