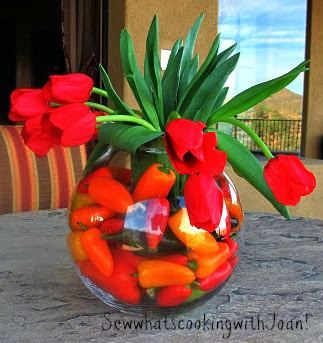 We enjoy the cuisine of the Southwestern United States known to be popular in the southwestern United States, the west coast and state of California. It comprises a fusion of recipes for foods that might have been eaten by Spanish colonial settlers, cowboys, Native Americans and Mexicans throughout the post- Colombian era; there is however, a great diversity in this kind of cuisine throughout the Southwestern states. Wee Bear and I just love it!

Southwestern cuisine is similar to Mexican cuisine, but, often involves larger cuts of meat, and less use of tripe, brain and other parts not considered as desirable in the United States. Like Mexican cuisine, it is also known for its use of spices (particularly the chile, or chili pepper) and accompaniment with beans (frijoles), cooked in a variety of manners. Note that "chili" generally refers to a thick stew or soup prepared with beans and meat, while "chile" refers to to the peppers that grow in this region and have been eaten for thousands of years by native people.

I took classes to learn more about this cuisine from Barbara Fenzl, who is owner of Les Gourmettes Cooking School in Phoenix, Arizona, and author of three cookbooks (one collaborated with Jacques Pepin) focused on the cuisine of the Southwest. She hosted a PBS television series, Savor the Southwest, which aired in over 90 cities! She also teaches at La Combe en Perigord in southern France, Rancho La Puerta in Mexico, and the Spa at Lake Austin in Texas. I was thrilled that she came to Desert Mountain (my community in Scottsdale) to teach on several occasions! I will be featuring some of my Southwestern recipes in future blogs, let me know if you enjoy!

My friend Ruth grew up in the southwest, is an accomplished home chef, and a successful career woman. She has opened up my eyes to many southwestern dishes that are delicious and eye appealing, over the years. This is a salad she created for us one evening, a few months ago. It is soooo tasty, I asked her if she would share the recipe with me, so that I could recreate and share with my viewers! It is easy to make and oh so Delicious! Don't you just love all the colors!! 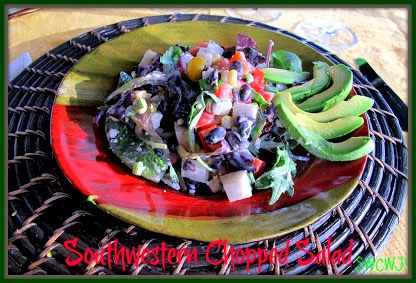 
Whisk the yogurt, mayonnaise, and buttermilk together. Stir in the onion and garlic. Season with salt and a generous grinding of pepper, then fold in the Chives and Cilantro and diced jalapeño if using. Refrigerate covered, until ready to use (minimum of 1 hour to bring out flavors,  up to 12 hours).

Assembly:
Combine all salad ingredients and toss with dressing. Don’t overdress, pass the remaining  dressing for those that want more.  ENJOY!     Serves 6-8

Have a beautiful day!  YOU ROCK!! JJ
Joan Messenger joanmessenger at 06:53