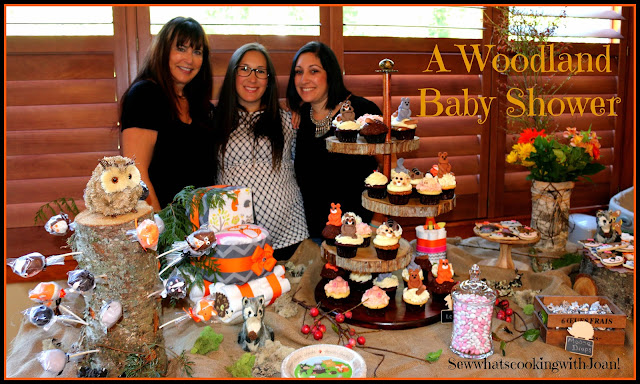 When Emily approached me about partnering with her to give "Sweet One", my daughter-in-law a baby girl shower....I instantly said, "Yes"! From there it just went "Wild"! Emily and I had so much fun creating a animal forest scape throughout the living, dining and family rooms! Here is how we did it!

The theme of the shower came from Amy, who is doing a woodland   themed nursery, so, we did a "Woodland Style Shower"!   From the incredible handmade Who-wich sandwiches to the adorable home made take away "Smore's", this shower would make any Mommy-to-be excited for the journey ahead! 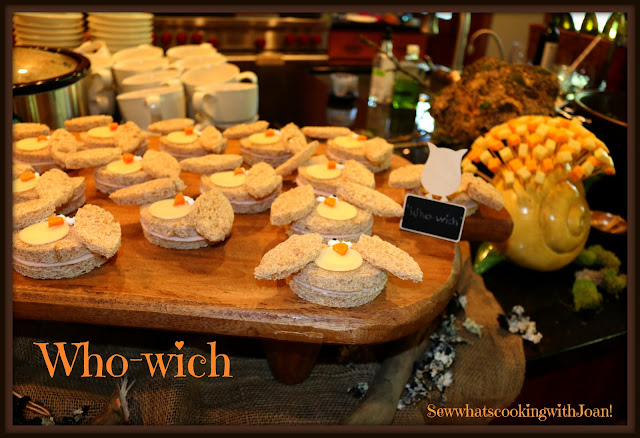 I created these cute little sandwiches to look like owl's and are made with wheat bread (any sandwich bread would work), turkey slices, provolone cheese slices, carrot, candy eyes and held together with Brummel and Brown yogurt based spread (butter or mayonnaise would work too). I used a  4" circle cutter to cut out the two slices of bread, a 1 1/2" cutter for the provolone tummy. After you cut the bread, align the round cutter on the top of the circle bread body, cut the little wings from each piece of bread. Make that same cut in the turkey, so that it is all inside the bread. 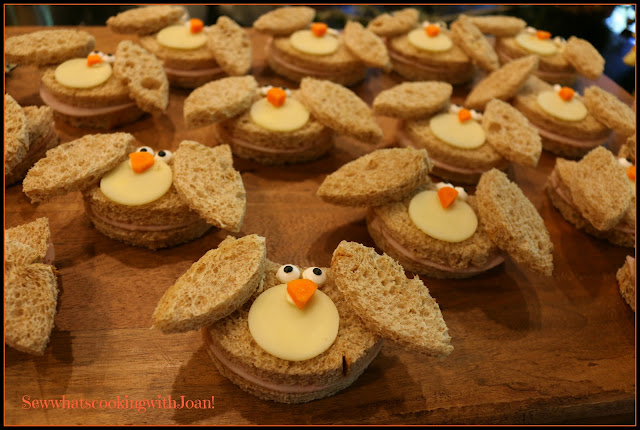 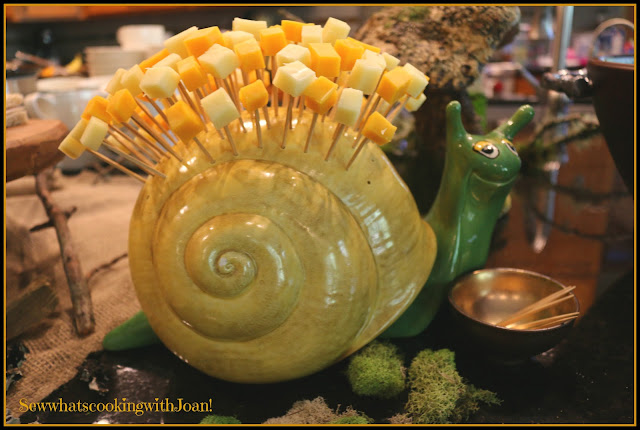 This adorable snail has been in our family for years, made by my late Aunt Gail. It is so cute holding the chunks of cheese or even little chunks of turkey or ham. 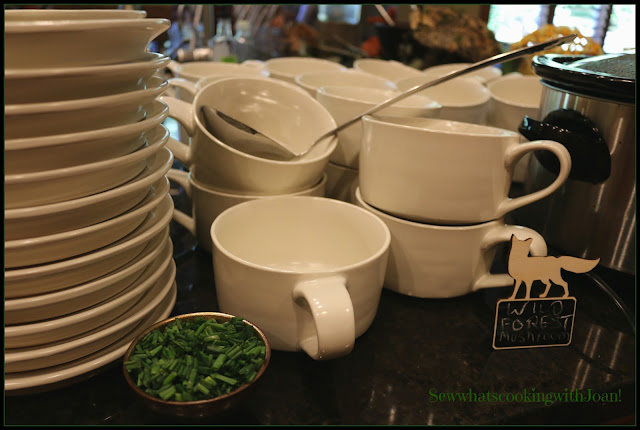 The "Forest Mushroom" Soup was one of the biggest hits! I made ahead and served with a garnish of snipped chives. This delicious soup recipe can be found on the link "Mushroom Soup"!
I served in this functional  cup and plate combo to the delight of many! I found them at Pottery Barn. 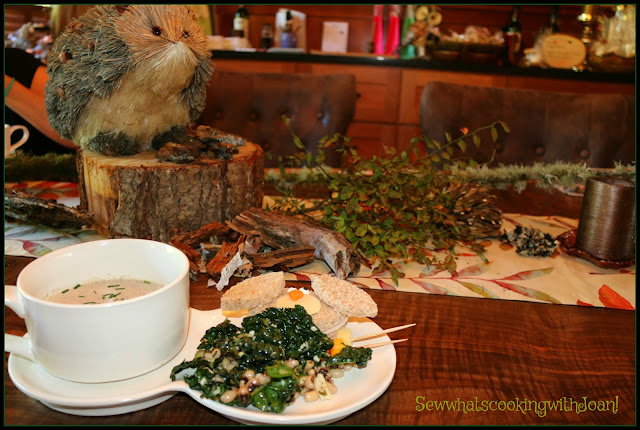 The salad is a "Black eyed Pea" Salad that I had made at Pasta and Company in Bellevue, Wa. 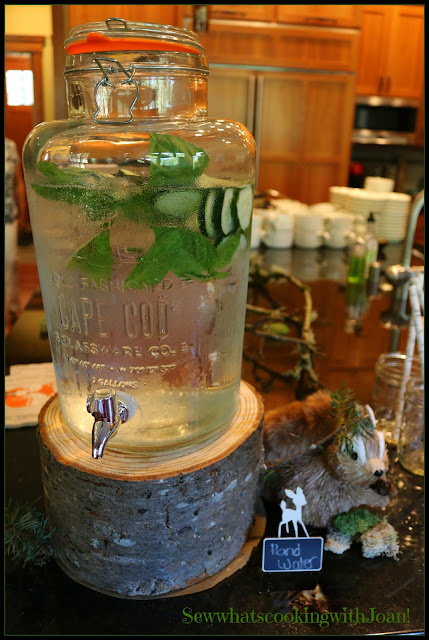 The refreshment bar consisted of "Pond Water" which I made with ice, water, freshly sliced cucumber and freshly snipped basil. 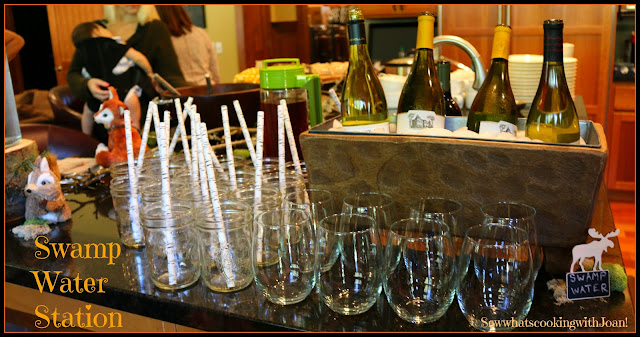 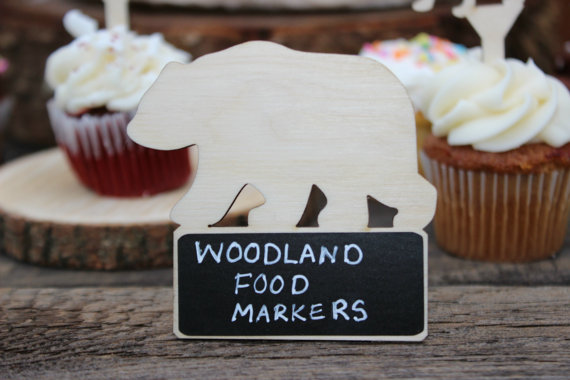 My Woodland food markers I purchased from CharleyChuck Designs
on Etsy! 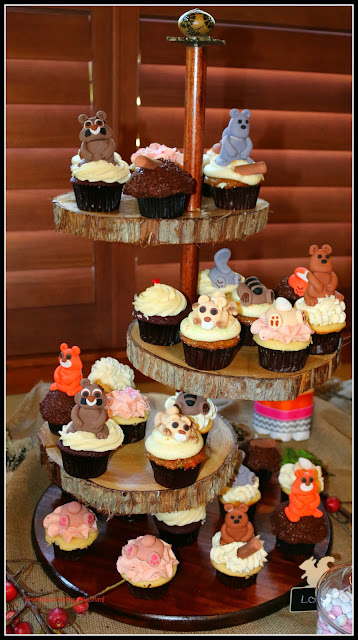 These cute woodland animals were made by a baker on Etsy, Lulu Belle Cakes and we purchased the cupcakes at "Trophy Cupcakes" in Bellevue, Wa. Emily and I assembled the morning of the shower. Aren't they adorable? 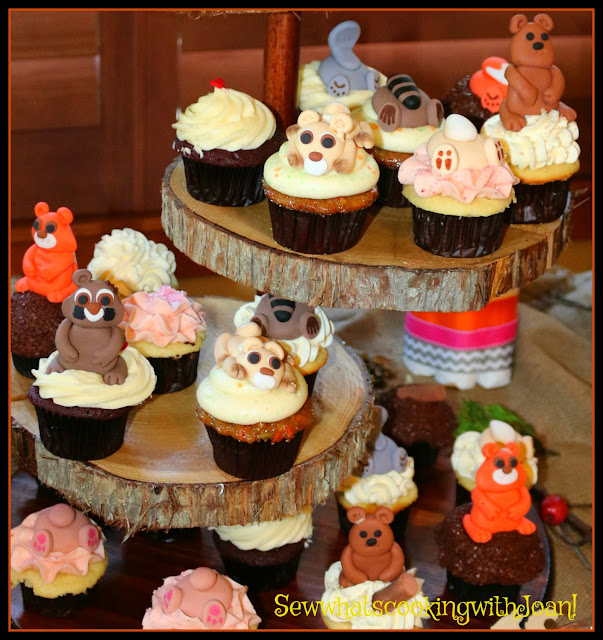 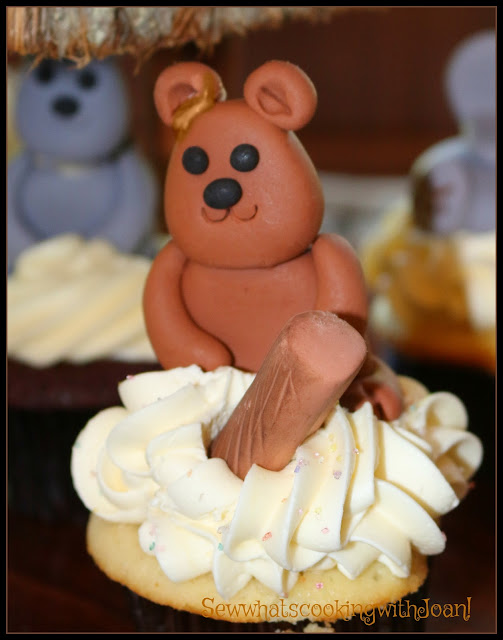 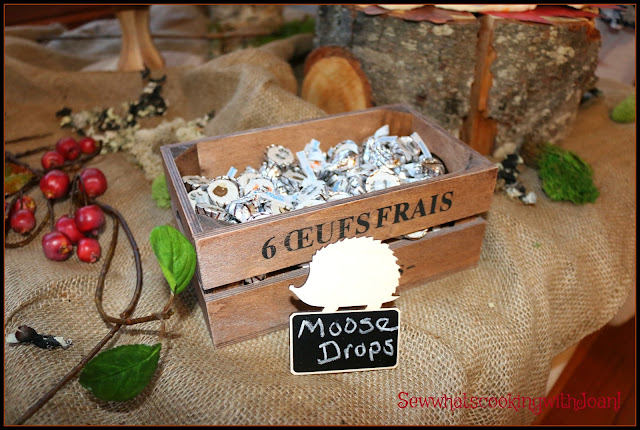 Candy kisses with "Woodland animal" picture on the bottom 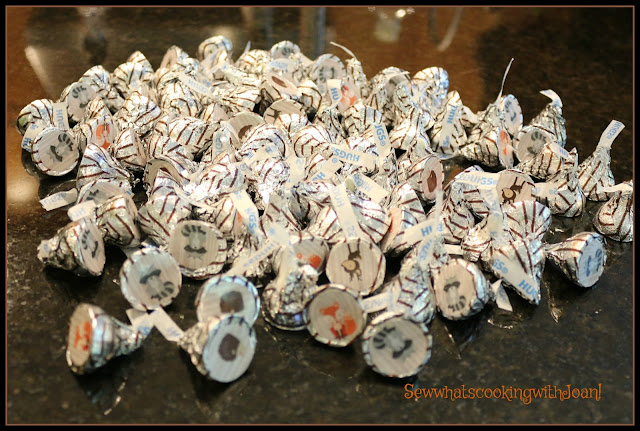 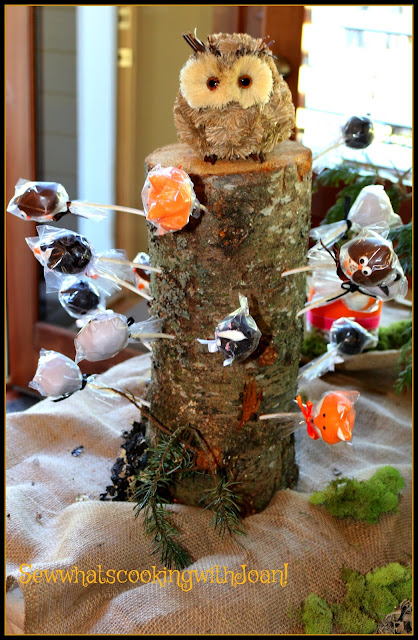 Woodland Animal Cake Pops made by a baker on Etsy.(she is no longer baking) I found this stump on my walk and decided it would be a perfect cake pop stand. I had my son TT drill some holes in it and Wha La! 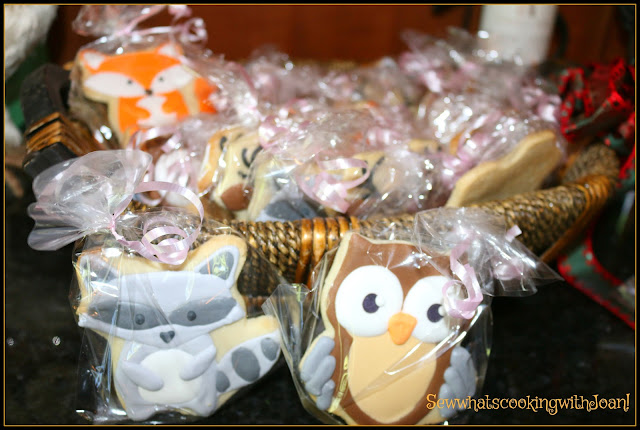 These cute take away cookies were purchased on Etsy! 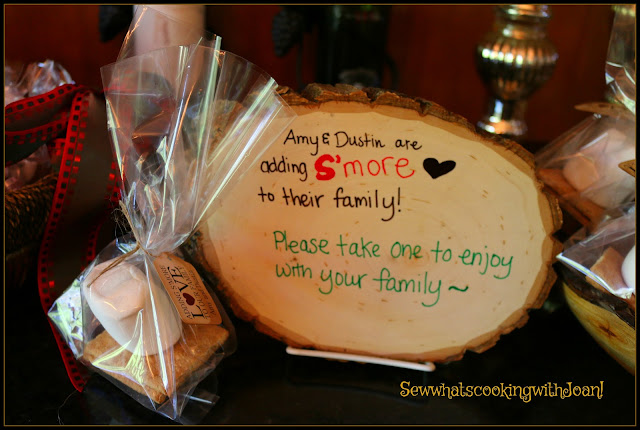 And a second take away gift, Emily and I assembled these adorable little Smore's! There is so much love here! 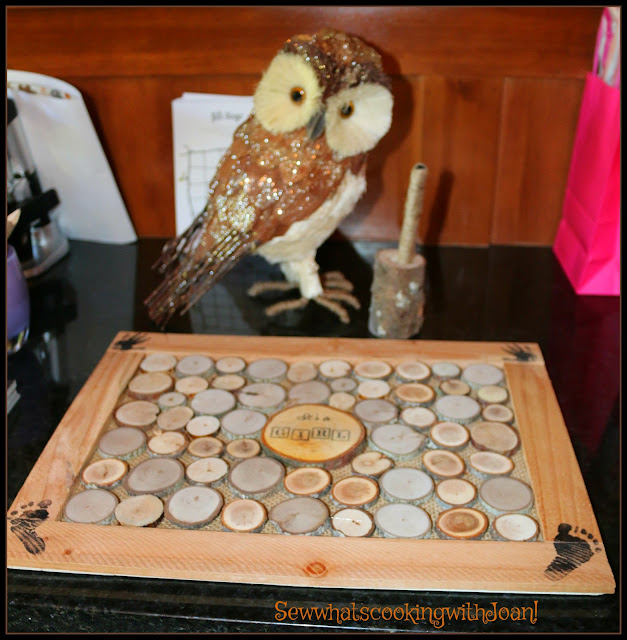 Emily found this cute memory board. Each guest signed a little wood round and put a message! Adorable! Found on Etsy  there are many to choose from. 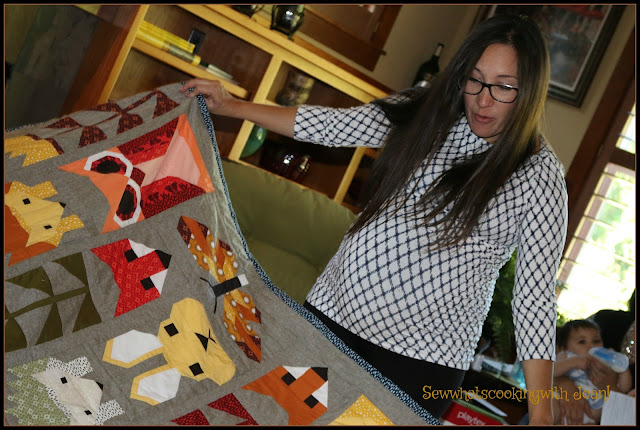 Of course while planning the party with Emily, I was also sewing up a beautiful woodland quilt!

And a few months later, I painted a mural that Amy wanted for little Katie's nursery! 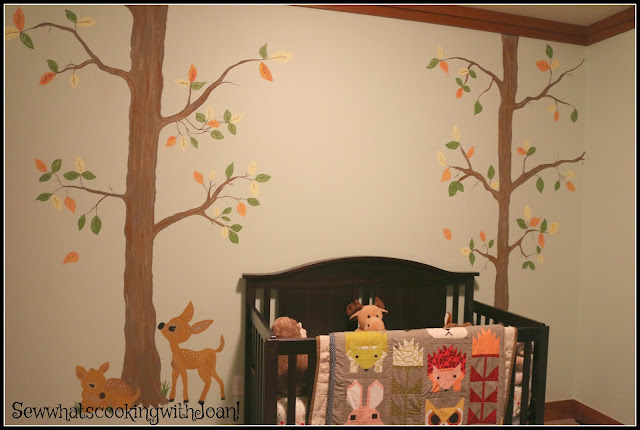 This shower was so much fun! And now we have little Katie, born in October 2016! I made a smaller "Owl Quilt" for little Katie's birth. 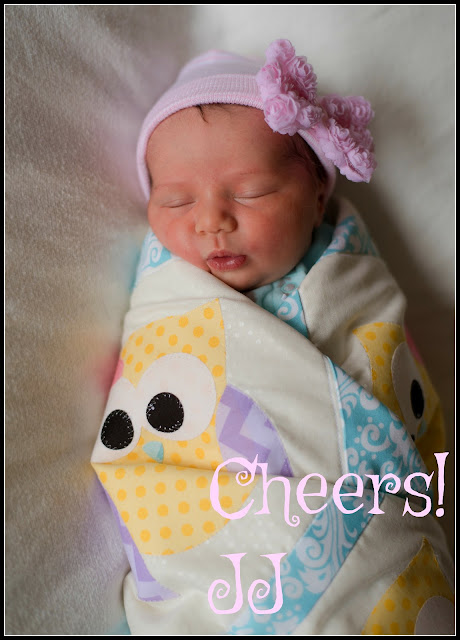