Oh what a night! Chef Jason Wilson (Crush restaurant) honored us with a private dinner, in our home.....well, it was to die for! The event, my daughter Holly's birthday! Ten guests were treated to a memorable evening, that none will forget.............ever!! 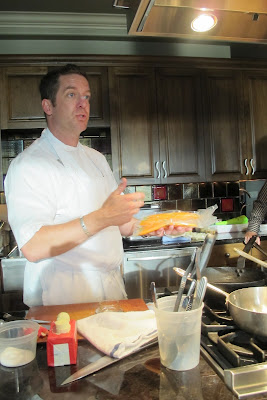 WOW!
Crush is considered one of the top restaurants in the Seattle and with a well-earned reputation for excellence, they're firmly planted on the national radar. 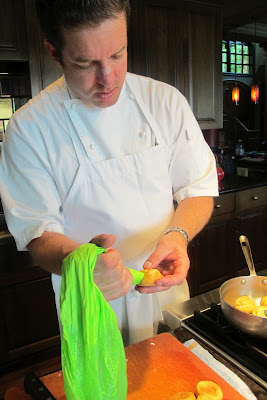 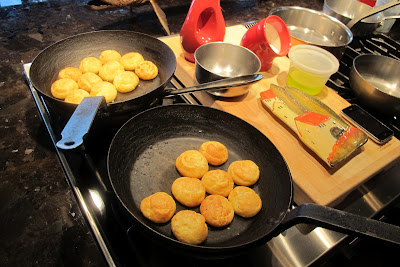 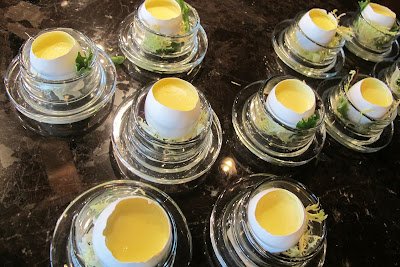 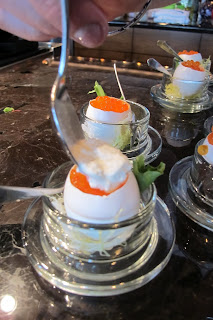 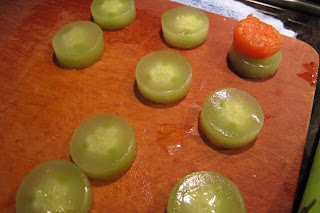 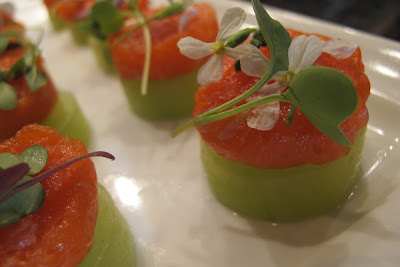 Jason spoke about his food philosophy and the commitment to organic and sustainable cuisine. He had a captive audience, as he waltzed around my kitchen effortlessly preparing each dish. It was a magical evening! 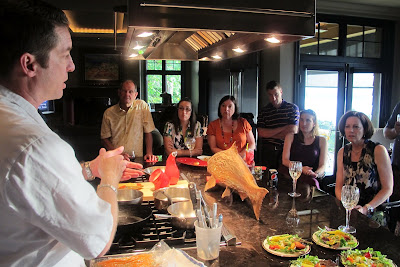 His vegetables are all grown in his garden, about 7 blocks from the restaurant and served within the same day. Jason brought his sous vide, and taught us how it's used. If you are unfamiliar with it, here is a short description. The term sous vide (pronounced soo-veed) is a French term meaning under vacumn. Sous vide is a culinary technique in which vacuum-sealed food is immersed in a water bath and cooked at a very precise consistent temperature. This cooking technique typically involves cooking food for longer periods of time at a lower temperature. The precise temperature control allows you to cook food to perfection, while the forgiving nature of this cooking method also eliminates concerns about overcooking. Sous vide cooking is extremely simple and fool-proof, and produces extraordinary results, our meal was cooked to perfection. Jason has a commercial version, but, there are home versions that range from $300.00-$500.00.
3rd Course
OLIVE OIL POACHED COPPER RIVER SALMON
ROASTED RADISHES / BROWN BUTTER CAULIFLOWER
GREEN ALMOND SORREL PISTOU / FAVAS 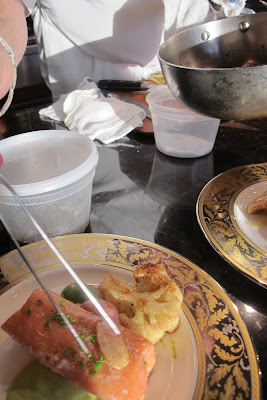 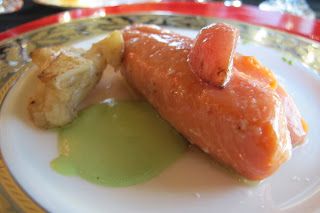 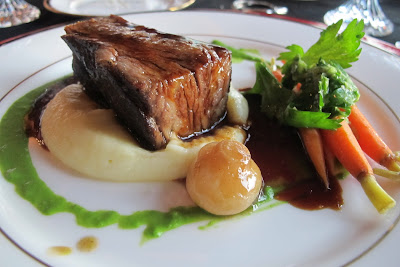 I was fortunate enough to have taken a cooking class with Chef Jason at Sur la Table, a few years ago. The Braised short rib was one of the dishes he prepared for us. With his permission I am sharing that recipe.

Season the ribs liberally with herbs, salt and pepper. Place in a large non-reactive bowl or deep container and cover with wine. Marinate for 12 hours in the refrigerator.
Preheat oven to 375 degrees F.
Remove ribs from marinade, pour all the wine into a sauce pot, and reduce by half. Meanwhile, heat a layer of olive oil in a large cast iron pan over medium-high heat. Sear ribs on all sides until well browned. Place browned ribs into a braising or deep roasting pan. Brown onion, carrots, celery, and garlic in the same cast iron pan, adding more oil as needed. Scatter browned vegetables over the ribs. Add the reduced wine, the stock, bay leaves, and mushrooms. Cover the pan with parchment paper and foil and place in the oven for 5 hours. Transfer from the oven and allow the ribs to rest for 1 hour before removing the bones. Skim any fat from the sauce. Remove vegetables from the pan and set aside. While ribs are resting, strain sauce into a sauce pot and reduce for 1 hour. Pour hot sauce over ribs and vegetables and serve.

*Allow about 1 pound of short ribs per serving. Wilson calls for ribs that are cut 3" thic; this allows a nice 2 rib portion. If you can only find ribs cut 2" thick, allow 3 ot 4 ribs per serving. Wilson recommends a Bordeaux style blend of cabernet and merlot for the marinade. When I make this dish, I use a nice Washington state wine.
*If you do not make your own stock, use beef broth enriched with gelatin. 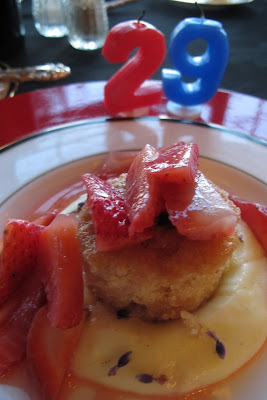 Holly was thrilled and honored to have her family there to help her celebrate and to have Jason prepare such a beautiful meal. Holly has recently been more aware of organic and sustainable food, so it was perfect for her to be learning from Chef Wilson. 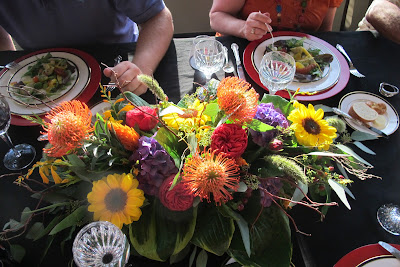 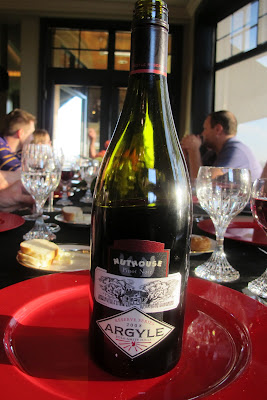 Served with the salmon Argyle Nuthouse pinot noir! Wine on the Way carries this one! 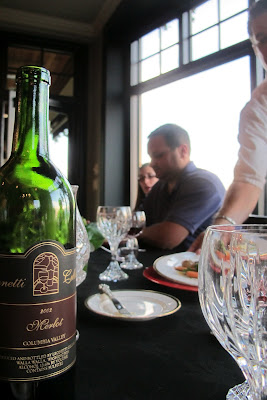 Served with the beef, 2002 Leonetti Merlot